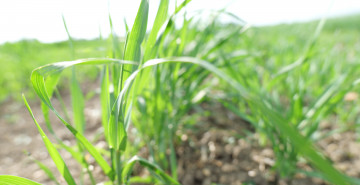 Scientists have accomplished a key step in the long-term ambition to engineer nitrogen-fixation into non-legume cereal crops by demonstrating that barley can instruct soil bacteria to convert nitrogen from the air into ammonia fertiliser.

This development empowers non-legume crops to communicate directly with nitrogen-fixing bacteria and takes us a step closer to reducing our reliance on synthetic fertilisers.

The world’s human population consumes more than half their calories from three crops – rice, wheat and maize. However, these crops rely heavily on the application of synthetic fertilisers like nitrogen. The industrial production of nitrogen in the form of ammonia requires a high consumption of fossil fuels and the over-application of fertilisers can also leach into water bodies and release potent greenhouse gases into the atmosphere.

With the Earth’s atmosphere made up of 78% nitrogen, wouldn’t it be great if plants could convert the nitrogen in the air into their own fertiliser? Well they can.

Legumes produce their own nitrogen fertiliser by partnering with naturally occurring rhizobia soil bacteria. The bacteria fix nitrogen from the air into ammonia, which they exchange with plants for sugars.

Professor Giles Oldroyd, who leads research into sustainable crop nutrition at the University of Cambridge’s Crop Science Centre and Sainsbury Laboratory, is coordinating a global effort to transfer the nitrogen-fixing ability of legumes into non-legume cereals so that crops like wheat, maize and rice can, in effect, make their own fertiliser.

“Analysing the genetics of both legume and non-legume plants, we have discovered that non-legumes already have many of the genes needed to form the root nodules that house the nitrogen-fixing bacteria, Professor Oldroyd said. “There is substantial overlap in the developmental programmes plants use for lateral roots and nitrogen-fixing nodules. Studying the evolution of plant genes also indicates that many non-legumes did once form symbiotic relationships with nitrogen-fixing soil bacteria but have lost this ability over time.”

There are hundreds of processes involved in successfully establishing nitrogen-fixing symbiosis between a plant and its colonising bacteria – both from the plant and bacteria perspective – which is why it requires the collaboration of multiple teams of scientists to work on the problem. A collaboration between Professor Oldroyd’s group and the University of Oxford and Massachusetts Institute of Technology (MIT) is working on one key part – the intimate communication between the plant and bacteria.

Their latest work, published in the journal Proceedings of the National Academy of Sciences, builds on their earlier design and engineering of a unique molecular dialogue between plants and bacteria. The synthetic signalling network they developed uses rhizopine compounds as chemical signals, which act like an intimate language that is only understood by the target plant and target bacteria.

The have now shown that the non-legume crop plant, barley, can communicate directly with free-living nitrogen-fixing bacteria using rhizopine chemical signals to tell the bacteria to start fixing nitrogen from the atmosphere and to turn it into ammonia.

Dr Ponraj Paramasivan, from Professor Oldroyd's group and who contributed to the engineering of barley to synthesise and then exude rhizopine from its roots, said this was a key advantage as only the target crop would benefit. “Currently weeds also benefit from applying nitrogen fertilisers, but this tactic means that only the specific crop plant that is engineered to produce the rhizopine signal will benefit,” he said.

The research, led by Dr Timothy Haskett and Professor Philip Poole, at the Department of Plant Sciences, University of Oxford, showed that plants secreting rhizopine controlled nitrogen fixation by the bacterium on its roots. The bacteria would only fix nitrogen on the barley which released rhizopine and not on any other plant.

The next step is to ensure that the ammonia produced by the bacteria is released and provides sufficient nitrogen fertiliser to the target plant.

'Biological nitrogen fixation is one of the key processes enabling more sustainable agricultural practices and has been the subject of extensive research efforts for decades,” Professor Poole said.” This work on developing plant control of bacterial nitrogen fixation is a key part of a large effort to transfer root nodulation and nitrogen fixation to cereals. This was only made possible through a great collaborative effort bringing together the work done by multiple labs over many years.”

Professor Oldroyd said other staple crops such as maize, rice, sorghum and cassava would be included in future research for transferring nitrogen fixation into non-legumes.