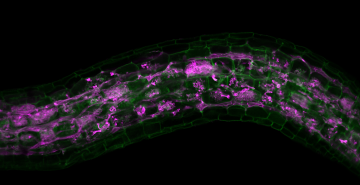 New research from the Crop Science Centre provides insights into the ancient signalling pathways facilitating the arbuscular mycorrhizal association, which is the most prevalent symbiosis in plants.

The mycorrhizal fungi help plants to capture nutrients from the soil and by shedding light on elements of the pathway used by plants to interact with these fungi, this research could help develop genetic strategies to enhance crop performance.

Published on June 15 in the journal PNAS, this study characterizes a symbiotic gene in rice called arbuscular receptor-like kinase 2 (ARK 2), as well as unveiling an ancient protein domain that defines a new class of signalling proteins.

A previous study from the Cereal Symbiosis laboratory, at the University of Cambridge, characterized arbuscular receptor-like kinase 1 (ARK1), which is the first known receptor-like kinase to regulate the symbiosis in arbusculated cells. Receptor-like kinases are cell-surface signalling proteins that normally have two modules: an extracellular domain, which perceives external signals and an intracellular kinase domain that initiates a cellular response.

In this new study, the authors performed a phylogenetic analysis to gain new insights into the evolutionary history of the receptor-like kinase subfamily that ARK1 belongs to. This revealed that a single gene called ARK duplicated early in the evolution of seed plants. This duplication generated ARK1 and ARK2. The authors functionally characterized ARK2 in rice using mutant lines.  Plants with ARK2 mutated had reduced levels of arbuscular mycorrhizal colonization, demonstrating ARK2 to have a symbiotic function. Global analyses of gene expression further showed that a set of genes is co-regulated by ARK1 and ARK2, suggesting the two receptor-like kinases regulate the arbuscular mycorrhizal symbiosis in a novel signalling pathway.

Surprisingly, while analysing the sequences of the extracellular domains in this subfamily, the authors discovered a new protein domain. The domain, named SPARK, has a unique arrangement of cysteines, an amino acid that is often found to stabilize protein domains by forming sulphur bonds. The domain has no resemblance at the sequence level with other known protein domains. The presence of the SPARK domain in receptor-like kinases of a species of algae revealed it to be an ancient protein domain.

The lead author, Hector Montero, said: “The discoveries within this research kick-start the study of a new class of signalling proteins that had been overlooked and we believe these findings will draw attention from those interested not only in mycorrhizal functioning but also in the evolution of receptor-like kinases. It will be important for future studies to explore the details of the signalling pathway orchestrated by the receptors and the function of the SPARK domain.”

This research was performed by Hector Montero and co-authors from the Cereal Symbiosis Laboratory in the Crop Science Centre, which is an alliance between the University of Cambridge and NIAB.