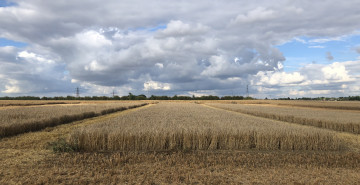 The trial will evaluate whether enhancing the natural capacity of crops to interact with common soil fungi can contribute to more sustainable, equitable food production

A field trial of genetically modified and gene edited barley is due to be planted this April. The research is evaluating whether improved crop interactions with naturally occurring soil fungi promote more sustainable food production.

Scientists are hopeful that the results from the trial will demonstrate ways to reduce the need for synthetic fertilisers, which could have significant benefits for improving soil health while contributing to more sustainable and equitable approaches to food production.

The trial is being conducted by researchers at the Crop Science Centre, an alliance between the University of Cambridge and NIAB. It will evaluate whether improving crop interactions with naturally occurring soil fungi can help them more efficiently absorb water along with nitrogen and phosphorous from the soil. Nitrogen and phosphorous are two essential nutrients critical to crop production that are often provided through synthetic fertilisers.

While the use of synthetic fertilisers increases crop productivity, excessive applications in high and middle-income countries has caused environmental pollution that reduces biodiversity, as well as producing greenhouse gas emissions. Meanwhile, in low-income countries, fertilisers are often too expensive or unavailable to local farmers, which limits food production. That contributes to both hunger and poverty, because in regions like sub-Saharan Africa, most people depend on farming to support their families.

“Working with natural and beneficial microbial associations in plants has the potential to replace or greatly reduce the need for inorganic fertilisers, with significant benefits for improving soil health while contributing to more sustainable and equitable approaches to food production,” said Professor Giles Oldroyd, Russell R Geiger Professor of Crop Science, who is leading the work.

He added: “There is an urgent need for ecologically sound approaches to food production that can satisfy the demands of a growing global population while respecting limits on natural resources. We believe biotechnology can be a valuable tool for expanding the options available to farmers around the world.”

The trial will evaluate a barley variety that has been genetically modified to boost expression levels of the NSP2 gene. This gene is naturally present in barley and boosting its expression enhances the crop’s existing capacity to engage with mycorrhizal fungi.

In addition, the trial will test varieties of barley that have been gene edited to suppress their interaction with arbuscular mycorrhizal fungi. This will allow scientists to better quantify how the microbes support plant development by assessing the full spectrum of interactions. They will measure yield and grain nutritional content in varieties with an enhanced capacity to engage the fungi and those in which it has been suppressed--while comparing both to the performance of a typical barley plant.

Professor Oldroyd said: “Barley has properties that make it an ideal crop for studying these interactions. The ultimate goal is to understand whether this same approach can be used to enhance the capacity of other food crops to interact with soil fungi in ways that boost productivity without the need for synthetic fertilisers."

The trial will assess production under high and low phosphate conditions. It will also investigate additional potential benefits of the relationship with mycorrhizal fungi, such as protecting crops from pests and disease.

The trial will follow the regulations that govern the planting of genetically modified crops in the UK, with oversight conducted by Defra and its Advisory Committee on Releases to the Environment (ACRE.) There will also be inspections during the trial, carried out by the Genetic Modification Inspectorate, which is part of the UK’s Animal and Plant Health Agency. The inspection reports will be publicly available.

Read our FAQ's on this field trial by clicking on this link https://www.cropsciencecentre.org/news/frequently-asked-questions-about-gm-field-trials

Update: the harvest of the GM barley in the field 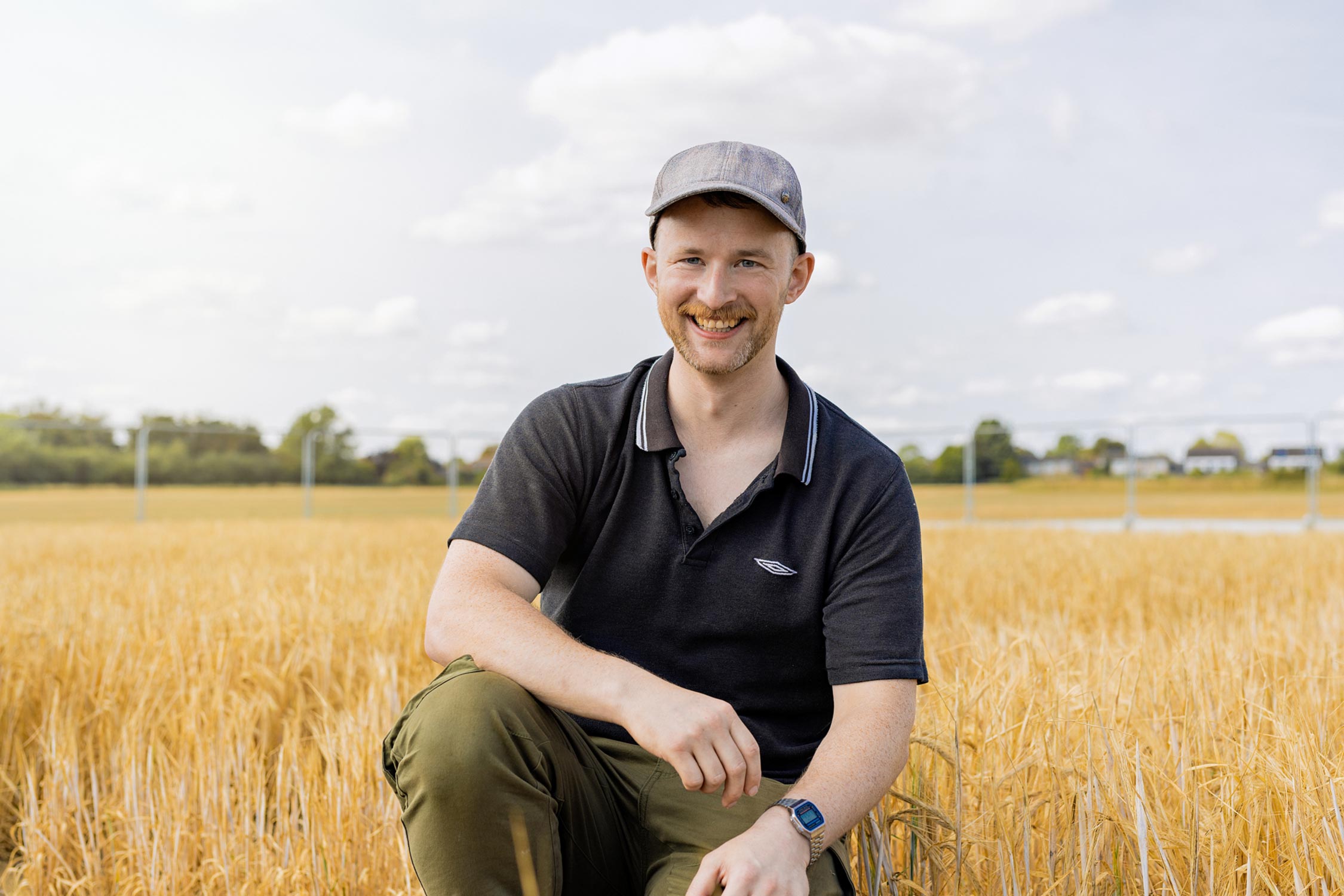 Talking immediately after this barley was harvested, on September 1, 2022, our field trials co-ordinator, Dr Tom Thirkell, reflected the following:

“Record-breaking warm, dry weather through July and August this year meant the crop ripened much quicker than we expected. This is mixed news; good because we don’t have to wait until later in the year when wetter weather could make the harvest tricky, but yields may be slightly reduced by the shorter growing season.

Yield data from the harvest will add to datasets collected throughout the season, including canopy height, leaf chlorophyll content, tiller number and the extent of arbuscular mycorrhizal fungal growth in the roots and soil of trial plots.

Grain from this trial is now being prepared for nutrient analysis. This will allow us to see how the beneficial symbiosis with arbuscular mycorrhizal fungi in the soil affected the uptake of phosphorus, nitrogen, and other important minerals into the grain. This trial was the first time these genotypes had been grown in the field, so every step along their growth and development was a milestone. 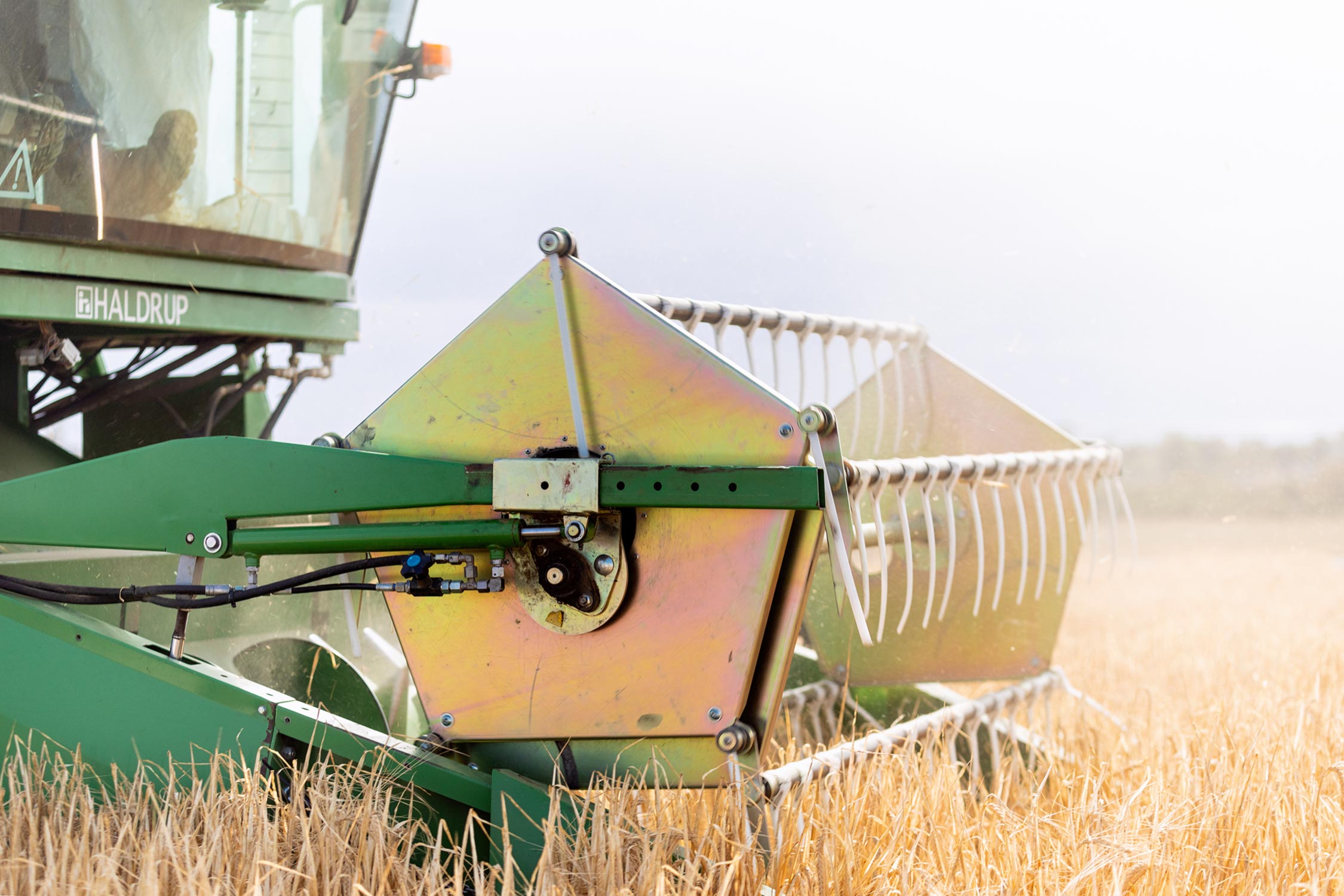 Despite of the unusual weather, the plants have performed well in the field, and we are excited to continue more trials in the years to come.”