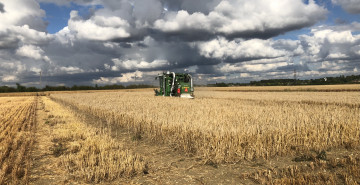 The public consultation process opened today for proposed field trials of new varieties of genetically modified barley. The trials aim to evaluate whether crop interactions with a naturally occurring soil fungi can be improved to promote more sustainable food production.

The application for the trials is being made by the Crop Science Centre, a collaboration between the University of Cambridge and NIAB, to the Department for Environment, Food & Rural Affairs (Defra).

The proposed trials are focused on the relationship between barley and a type of fungi called arbuscular mycorrhizal. In natural ecosystems many types of plants form a mutually beneficial relationship with these fungi to help them more efficiently absorb water, nitrogen and phosphorous from the soil.

This trial will enable scientists to discover whether enhancing the mutually beneficial relationship for food crops can allow for the reduction, or even elimination, of the need to supply nitrogen and phosphorous via synthetic fertilizers.

The proposed field trial initially would evaluate a variety of barley that has been modified to express higher levels of the NSP2 gene native to barley to enhance its existing capacity to engage the fungi. The application to Defra also requests permission to conduct a trial at a later date with a variety of barley modified with the NSP2 gene from a common ground cover plant, commonly known as barrel medic (scientific name Medicago truncatula), that also enhances barley’s interactions with arbuscular mycorrhizal fungi.

If allowed to proceed, the trial will follow the regulations that govern the planting of genetically modified crops in the UK, with oversight conducted by Defra and its Advisory Committee on Releases to the Environment (ACRE.) There will also be inspections during the trial, carried out by the Genetic Modification Inspectorate, which is part of the UK’s Animal and Plant Health Agency. Their inspection reports are publicly available

The request to Defra proposes initiating the trial in the spring of 2022. Once harvested the crop yield and grain nutrition will be quantified to assess impacts of the improved capacity to interact with the arbuscular mycorrhizal fungi. The trial will also investigate additional potential benefits of the relationship with fungi, such as protecting crops from pests and disease

Why are these field trials important?

Why are arbuscular mycorrhizal fungi important to crops?

Most plants, including cereal crops, engage in symbiotic interactions with beneficial arbuscular mycorrhizal fungi, which form highly branched structures in root cells, called arbuscules, for nutrient exchange with the plant. Arbuscular mycorrhizal fungi help plants to capture nutrients from the soil, including sources of phosphorus and nitrogen, as well as water, that are critical to support plant growth. Furthermore, these interactions increase resistance to plant diseases, as well as tolerances to many stresses, including drought and salt.

What is being tested in the field?

The barley lines in this field trial already have been studied extensively in laboratories and glasshouses. Researchers are in the process of publishing the results from these studies. They are now proposing to test the plants in the field, to find out if enhancing their capacity to engage arbuscular mycorrhizal fungi is maintained under typical farming conditions—and in ways that can reduce the need for synthetic fertilizers. Researchers will be assessing how the plants perform in terms of their yield and biomass as well as plant-susceptibility to pests and pathogens. The goal is for the genetically modified crops to contribute to efforts to sustainably boost crop productivity, helping farmers to meet rising food demands and combat hunger while also reducing agriculture’s contribution to climate change and biodiversity loss.

Why focus on barley?

Barley grows in 100 countries and is one of the most commonly used cereal grains after wheat, corn, and rice. It is a cereal that is easy to work with and in these trials the impact of overexpressing NSP2 is being assessed in barley, with the expectation that if it works in barley it can be developed in other cereal crops, if the current field trials show promising results.

The principles of regenerative agriculture, or organic farming have an important role in increasing soil health by reducing soil disturbance and chemicals that reduce the abundance of mycorrhizal fungi in soils and plant roots. However, the impact of these practices will be limited unless combined with innovations in crop genetics to help crops respond more positively to mycorrhizal fungal colonisation.

What is the difference between GM and gene-editing?

Genetic modification is the process of introducing extra DNA into the plant, adding one or a small number of additional genes to a plant’s complement of several tens of thousands of genes.

Genetic editing is the technique of making small changes to a precisely targeted gene that is already present in the plant. The final gene edited plant does not carry additional genes.

Why is there a need to carry out this research in the UK?

The UK has world-class plant scientists who are at the forefront of developing scientific and technological advances that can make agriculture more sustainable. Plant biotechnology has become an established approach to improve plant breeding in many parts of the world, and genetically modified crops have been grown commercially since 1994, with large-scale cultivation of genetically modified field crops starting in 1996. It is important that the UK maintains its expertise in these technologies and explores their potential contribution to sustainable food systems.

How will the trial be regulated?

There are rigorous regulations that govern the planting of genetically modified crops in the UK, overseen by the Department for Environment, Food & Rural Affairs (Defra) and its independent Advisory Committee on Releases to the Environment (ACRE.) This includes inspections during the trial, carried out by the Genetic Modification Inspectorate, which is part of the UK’s Animal and Plant Health Agency. The ensuing inspection reports are made publicly available.

Is there a risk of cross-pollination with local wild plants or crops?

Barley is a self-pollinating crop with very low rates of cross-pollination with other barley plants. Nevertheless, the outer edge of the trial will have a 3-metre-wide strip of conventional barley to function as a buffer to reduce escape of pollen outside of the trial. In addition, no barley, other cereals, or grasses will be cultivated or allowed to grow within 20 metres of the trial.

Will the grains from the genetically modified plants be consumed?

In accordance with regulations governing the testing of genetically modified crops, the plants and seeds arising from this trial will not enter the food or feed chains.

What is the size of the trial?

The area of the proposed trial, including the barley pollen barrier, will be no more than 2100 square metres, which is around one fifth of a hectare.

What are the genes that have been modified in the barley varieties proposed for the field trial?

Scientists are seeking permission from Defra to field test a variety of barley modified to “overexpress” a naturally occurring gene native to barley called NSP2, which controls barley’s interactions with arbuscular mycorrhizal fungi. The application to Defra also requests permission to conduct a trial at a later date with a variety of barley modified with NSP2 from a common ground cover legume plant known as Medicago truncatula.

Previous research has shown that overexpression of NSP2 promotes beneficial interactions with arbuscular mycorrhizal fungi in ways that could help crops more efficiently absorb nitrogen and phosphorous from the soil without the need for fertilizers or allow farmers to greatly reduce fertilizer usage.

Scientists also want to study whether this improvement prompts the barley to engage the fungi even in soils that contain high concentrations of phosphorus, which can happen when fields are heavily fertilized. In conventional crops, heavily fertilized soils suppress or completely shut down plant interactions with arbuscular mycorrhizal fungi. But there is evidence that overexpression of NSP2 in the genetically modified barley plants could encourage interactions with the fungi in many types of field conditions. For example, in fields that have been excessively fertilized, engaging the fungi could lead to more efficient fertilizer uptake, which could reduce run-off that pollutes waterways.

Will independent experts and the public be consulted?

As part of the statutory process co-ordinated by the Department for Environment, Food & Rural Affairs (Defra), there is a period of public consultation before a decision is made on whether the field trial can go ahead. Any concerns will be considered by the independent experts of ACRE, the Advisory Committee on Releases to the Environment.

ACRE is a statutory advisory committee appointed under section 124 of the Environmental Protection Act 1990 to provide advice to government regarding the risks to human health and the environment from the release of genetically modified organisms (GMOs).

Will the knowledge gained from this trial be accessible to the public?

Yes. If approved, the results of the field trial will be published after peer review in appropriate scientific journals and using the open access model, where the papers are free for anyone to download. We will also disseminate data and new knowledge through presentations at scientific conferences.

What is the process of approval for research using genetically modified crops and microbes?

If a research project requires experimentation using genetically modified crops, approval from Defra is required. We must carry out a full risk assessment of the project, which is scrutinised by the institute’s own Biosafety Committee and other experts in-house, and then apply to Defra. In the application, we describe the nature of the experiment, the type of plant material and the specific genetic modifications we have carried out. We are also required to assess the risks to human health and the environment. The application becomes publicly available on the Defra website and the application is independently assessed by ACRE. Once the review of the risk assessment has been carried out, ACRE make their recommendation to Defra, which considers it along with any public representations that the department has received. Defra then decides whether to grant consent to conduct the field trial, and whether to impose specific conditions.

Will the consultation process for this trial be impacted by the new UK government rules on gene editing research?

On 20 January, the UK government announced new legislation will be put in place to reduce restrictions around gene-editing research. The legislation will therefore make it easier for scientists to conduct trials that seek to develop more sustainable, resilient and productive crops. Safety standards and transparency remain as before,  with all scientists undertaking research of this kind obliged to notify the Department for Environment, Food and Rural Affairs (Defra) of any such trial.